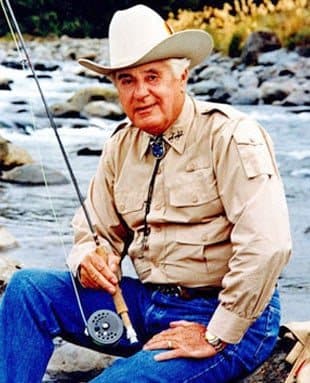 Curtis Edward Gowdy (July 31, 1919–February 20, 2006) was an American sportscaster, well known as the longtime “voice” of the Boston Red Sox and for his coverage of many nationally-televised sporting events. He also hosted the long-running outdoors show The American Sportsman on ABC.

The American Sportsman was a television series from 1965 to 1986 on ABC which presented filmed highlights of hunting and/or fishing trips involving the program’s hosts and celebrities. It was typically presented on Sunday afternoons, frequently following coverage of live sporting events. The show had its roots in a 20-minute segment depicting Curt Gowdy and Joe Brooks fly fishing in the Andes Mountains in Argentina in 1964. The segment appeared on the Wide World of Sports and immediately was spun off into its own. The show’s first episode was on January 31, 1965.

Gowdy was the first individual sports figure to win a Peabody Award for outstanding Journalism. He won 7 Emmys for sports coverage and 6 Emmys for his TV program “The American Sportsman”

Gowdy, a Wyoming native was inducted into the Wyoming Outdoor Hall of Fame in 2004. A state park in Wyoming which opened in 1971, was officially named for Gowdy on March 27, 1972, one of numerous honors bestowed on the native son from the state of Wyoming on “Curt Gowdy Day.” The 11,000 acre Curt Gowdy State Park is halfway between his hometown of Cheyenne and his college town of Laramie. Additional acreage was acquired by the state for the park in 2006. “It has two beautiful lakes, hiking trails, camping, boating, fishing, and beauty,” said Gowdy. “It has everything I love. What greater honor can a man receive?”

Gowdy was proud of his Wyoming heritage and loved the outdoors, and said that he was “born with a fly-rod in one hand,” and that the sports microphone came a little later. In 2002, he recalled that his father, Edward Curtis Gowdy, who had taught him to hunt and fish, was the best fly-fisherman in the state. “We had free access to prime-time fishing and hunting. The outdoors was a way of life for me. I should have paid them to host The American Sportsman,” he said.