Were enshrined into the Fishing Hall of Fame in 2009. 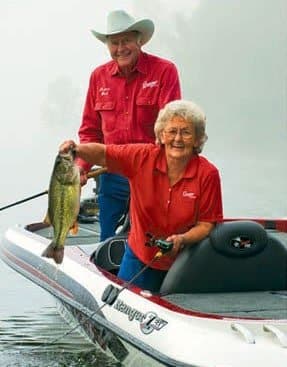 Internationally known as the “Father of the Modern Bass Boat,” Forrest L. Wood was born June 9, 1932 in the tiny town of Flippin, in the Ozark Mountains of Arkansas.

The now famous Ranger Boat Company was founded in 1968 and almost as quickly was destroyed by fire in 1971. With no insurance and armed only with 60 salvaged boat orders, the undaunted family nailed a telephone to a scorched tree, cleaned off the blackened site and began rebuilding. Within 40 days the company was once again building boats.

An excellent fisherman and guide, Forrest brought innovation to the simple boats of his day. The tall, lanky fisherman made his boat so much more comfortable and efficient that, when other anglers saw it at early fishing tournaments, those fishermen wanted boats from “The Ranger Man” and the company prospered.

Forrest helped pioneer the sport of competitive bass fishing. Personally fishing the B.A.S.S. circuit, he did well, qualifying for two of the prestigious BassMasters Classic events and went on to become the foremost innovator of bass boat design and safety.

Wood’s boat-building contributions are legendary. He designed and patented the first aerated livewells to hold and protect fish for later live release. He was the first to use heavy gauge wire to minimize current loss in trolling motor operation. He installed conduit in his boats to protect and house essential electrical wiring. But it was his designs, and innovations in upright and level boat flotation that later encouraged the U.S. Coast Guard to adopt the standards that continue to save lives today.

Forrest’s simple business philosophy encompasses the essence of marketing. In his words, “You must build a good product …price it fairly … let folks know you have it, and treat your customers right.”

Forrest and his family believe that any American can go as far as effort and determination will take them; that individual efforts, not big government, contribute to continued national strength and growth. The Woods underscore that positive attitudes have a positive effect on our lives, our times, and even our economy … and they practice what they preach.

Forrest has been widely recognized for his personal and financial contributions to conservation causes, and has been inducted into the Professional Bass Fishing Hall of Fame, National Freshwater Fishing Hall of Fame, the International Boating Hall of Fame, the National Marine Manufacturers Hall of Fame, and the Arkansas Game & Fish Foundation Outdoor Hall of Fame, and received the American Sportfishing Association Lifetime Achievement Award in 1998. He, along with his wife, best friend and teammate, Nina, was prominently featured in the books, “Rare Breed-The Entrepreneur, An American Culture” and “Living Legends of Fishing.” In 2003 the B.A.S.S. Federations presented Forrest with the Lifetime Achievement Award as a “visionary in the bass boat industry” and praised him for continuing support of the Federations. He and Nina have also been featured on Outdoor Life Network’s, Circle of Honor program, as Americans who have made great contributions to protection of the environment and promotion of the great outdoors; this also lending itself to his being named as one of Field and Streams top 50 fishing legends in the May 2005 issue. In 2005 Forrest was inducted into the Arkansas Walk of Fame in Hot Springs, Arkansas and in 2006 was inducted into the Arkansas Business Hall of Fame at the University of Arkansas Sam Walton College of Business. Locally and most recently, on May 4, 2007, United States Congressman John Paul Hammerschmidt, on behalf of the North Arkansas College Foundation, presented Forrest with The Ozark Ambassador Award in Harrison, Arkansas.

Forrest takes great pride in Ranger Boats and continues to be very active in promoting the legendary company he founded. He is also the namesake behind the renowned FLW Outdoors Tournament Circuit and widely marketed line of fishing products.

Widely known and respected as the First Lady of Ranger Boats, Nina Wood is a close friend of anglers everywhere. Scores of professional anglers attribute their professional start and first sponsorship to the efforts of Nina. Her commitment to the sport of fishing, and the individuals within the sport, has helped develop countless heroes and remains a strong current of enthusiasm and encouragement. Nina also carries the distinction of being the first lifetime member of the Bass-n-Gal tournament organization. She has been featured in numerous magazine and newspaper articles in addition to a prominent list of television appearances. Featured in the book Rare Breed by Bill McPhee, Nina was recognized as one of America¹s unique and highly motivated entrepreneurs. Always smiling, Nina truly enjoys fishing and is always ready for some good-spirited angling competition. The mother of four outstanding daughters, Nina is the wife, partner, and eternal friend of Forrest Wood.

He and Nina also continue riding herd over the family’s extensive cattle ranch. In 1998, Forrest was humbled by the responsibility of being appointed to the Arkansas Game and Fish Commission, and during his seven-year term helped to ensure conservation efforts in Arkansas. He continues to be very involved in helping to establish a minimum flow of water for the White River system in northern Arkansas to facilitate a better habitat for trout, not only aiding the thriving tourism industry in the area but supplying a tremendous boost to the environment. He’s a voracious reader and highly informed citizen and also tries never to miss an opportunity to hunt and fish across his beloved America.