History of the Fresh Water Fishing Hall of Fame 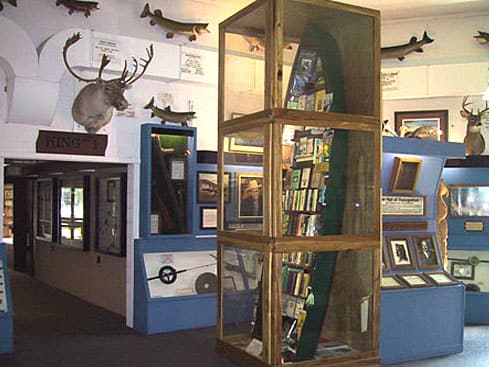 When you mention the Fresh Water Fishing Hall of Fame to someone they typically think of a record-keeping operation.  This must be where those world records for all the different fish species are kept.  They’re partially right.  The Hall of Fame does maintain a record book of both world record fish as well as line-class records for all of the fresh water species in North America.  But there is more. Consider their special recognition and enshrinement program.  There are seven categories for this nationally recognized fresh water sportfishing achievement program which has enshrined and inducted over 300 persons and organizations since 1980. The LEGENDARY ANGLER category considers people who have had at least a regional achievement in their endeavors to have a lasting impact to benefit fresh water sportfishing.  The LEGENDARY COMMUNICATOR category was recently added and considers people who have developed a unique communication means or avenue which was instrumental in introducing fishing to the public or in maintaining public interest or awareness.  The LEGENDARY GUIDE category is one of the more popular ones when it comes to the general public and for that slot people who have gained, by their expertise and professionalism, a status of credibility and immortality judged so by their customers, the region and/or their peers fill this niche.

The ORGANIZATIONAL/GOVERNMENTAL ACHIEVEMENT RECOGNITION category considers organizations or government entities which have demonstrated and/or performed a valuable service or act to benefit fresh water sportfishing within its jurisdiction or the boundaries of its organization whether local, regional or national.  Then there is the SPECIAL RECOGNITION AWARD which recognizes individuals, groups, or organizations for their programs benefitting fresh water angling which clearly are not covered by other recognition categories.  New for 2009, the Hall has introduced a LEGENDARY ARTIST category.  This category will recognize those artists and photographers, etc., whose works are charcterized by scenes, sculptures and creations which depict fresh water fishes, fresh water sportfishing, fishing tackle and equipment.

Some examples of the individuals that fill some of these categories won’t be a surprise.  The Lindner brothers, Ron and Al, have been enshrined in the Hall of Fame along with greats like Curt Gowdy and Ernest Hemingway just to name a few.  Greats like Gary Roach and Hank Parker are just a couple of individuals who have been inducted as LEGENDARY ANGLERS.
There have been many great anglers, communicators, guides and fishing ambassadors who have spent their lives promoting a sport they had a passion for.  It is these people who are recognized through the Hall of Fame as fulfilling their dreams and creating an environment to promote and expand the great sport of fresh water fishing.
The Hall of Fame also has a well-attended museum.  The museum is located in Hayward, WI and not only will you be able to take a trip down memory lane with all the collectibles that are displayed there, but there is a fishing pond and a unique grounds area. 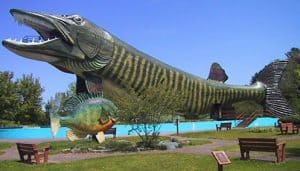 The highlight of the museum complex is a landmark “Shrine to Anglers” which is a structure one-half city block long and four and one-half stories tall, of concrete, steel and fiberglass, hand-sculpted into the likeness of a leaping muskellunge. Its innards are a museum and its gaping open jaw accommodates about 20 persons or more as an observation platform. The landmark is surrounded by a quarter-acre nature pond. The adjacent four-building museum complex displays fishing artifacts, housing an inventory of over 50,000 vintage and historical lures, rods, reels and angling accessories.  Additionally there are about 300 mounted fresh water fish and about 1,000 vintage outboard motors, including Evinrude’s first production outboard from 1909. The original idea for the Hall of Fame came from Bob Kutz, of Hayward, Wisconsin, in 1960.  Kutz with the aid of his wife, Fannie, became the developers and managers of the project. In 1969, a group of five local individuals decided that there was a need to generate some well-needed funding for the project and after a several-year effort to generate government funding did not materialize, the effort turned to soliciting individuals and fishing industry corporations for a one million dollar fund goal. While individuals began to respond immediately it took a non-fishing corporate entity to become the major donor: the Jim Beam whiskey distillers of Chicago and Kentucky. Beam offered a ten-year program to produce benefits from the national sale of collectors fish decanters from which the fledgling Hall would net about $300,000 over a ten-year period. The Hall concept now had assurance of $20-$30,000 a year for an extended period to pay basic ongoing and promotion expenses while national support was nurtured for further funding and growth.  That “Beam” contract generated the interest of the nation’s outdoor writers and encouraged thousands of individual’s contributions. The “James B. Beam” Corporation can rightfully be called the “Father” of the Fresh Water Fishing Hall of Fame. In 1971 the first “Beam” decanter was issued from which the Hall of Fame netted $28,000; its first major source of revenue.  In 1972 an office and headquarters were opened in a donated space for the Hall of Fame to operate from and a concentrated effort to publicize the concept nationally was initiated. 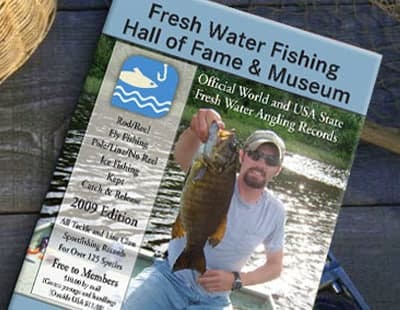 It wasn’t until 1976 that the gateway building was opened as a temporary museum facility and visitors were encouraged for a donation. Eight thousand visitors came that first summer season. A 50-cent gate was initiated the end of July. Each year saw continued growth and in 1993 the Hall of Fame instituted the “catch and release” program to recognize angler accomplishments while practicing conservation of the resource. The program was favorably received by the angler public and the media. Recognition is based on length only, to encourage less stressful release, and depends largely on the integrity of the angler. Today over 50,000 people visit the museum annually to see such sights as the first boat motor that was commercially built by Ole Evinrude or the displays of classic lures.  Some want to take a stroll down memory lane while others are just curious when it comes to some of that antique gear.  There is something for everyone when it comes to the artifacts and history at the museum. But people still think of the record book when it comes to the Hall of Fame.  The record book is where you can get the information regarding all the world record catches for every fresh water species in America.  There are also loads of line-class records, some which have yet to be filled.  Yes, anyone can hold a world record; you just might have to do some research and look for those species that are not as “popular” as let’s say the largemouth bass or walleye.  Although, never rule out that the largemouth or walleye record could be broken.  It seems that every year there is a popular species that produces a record-book fish.  This year is could be that bass or walleye.  Anglers have been close in not-too-distant years and its just a matter of being in the right place at the right time.

For Recognition In The Fresh Water Fishing Hall Of Fame