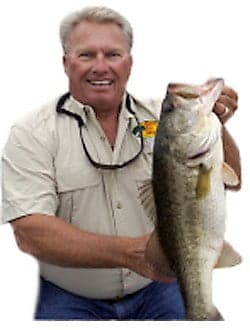 Roland Martin was inducted into the Freshwater Fishing Hall of Fame in 1986 as a Legendary Angler. For over two decades Martin has shared his secret on how to outsmart a variety of game-fish through television, radio, and print. Martin’s BASSMASTER Tournament Trail career includes an unprecedented list of achievements. He holds the records for most tournaments won at 19 and most B.A.S.S. Angler-of-the-Year titles at nine. In addition, he has made 25 appearances in bass fishing’s world championship event, the BASS Masters Classic. He also holds the record of 20, for 2nd place BASS finishes.

There are a lot of bass fishermen in this country who think of crankbaits as dummy baits that anyone can use to catch fish with. They think that all you have to do is throw it out and retrieve it. But there’s a great deal more to crankbait fishing than that.

I’ve used crankbaits to catch big bass from California to Connecticut. From Canada to south Florida. I can tell you these diving baits are among the versatile lures an angler can fish. But knowledgeable fishermen know there is a real science involved in getting the most out of a crankbait.

Generally speaking, I fish crankbaits about 25 percent of the time and catch about 25 percent of my fish that way. In tournaments, I catch at least a third of my bass on crankbaits. Crankbaits are an excellent way to locate and quickly catch a limit of fish, which makes them ideal weapons for tournament fishing. Over the years, I’ve refined my system of crankbait fishing and, as a result, at least four of my national tournament victories can be attributed to that particular skill.

The average angler often doesn’t take water temperature into account, but thats one of the main factors in my crankbait success. Thats one reason why crankbaits are especially productive in pre-spawn situations when the big female bass move up adjacent to the spawning areas. They’ll get on points and ledges of creek channels and in shallow timber and brushy areas — areas where the water is slightly warmer than other parts of the lake.

The fish in these warmer areas are a little more aggressive than their cold-water counterparts, creating a deadly crankbait situation. Generally, I don’t use crankbaits in real cold-water situations.

As far as water clarity, I prefer to fish crankbaits in slightly dingy water. A prime example of a good cranking lake is the typical Tennessee Valley Authority reservoir, which is slightly turbid. I just don’t like to use crankbaits in clear water, but they can be effective in some clear-water situations.

If you fish a crankbait enough, you’ll discover that these diving plugs are among the best possible tools for covering a lot of water and finding fish. If you’re on a good pattern and know the color of the lure to use and the right cover to fish, you can cover more water with a crankbait than you can even with a spinnerbait. Crankbaits are high saturation lures. If the bass are feeding for only 20 minutes in the morning, you can make more casts and show the bait to more fish in that 20 minutes with a crankbait than any other lure. Thats one of its biggest advantages.

During the last few years, I’ve traded in the traditional casting tackle for heavy tackle for my crankbait fishing. Ill often throw a big deep-diving crankbait on my flipping stick with a high speed reel. The big 7 1/2-foot rod gives me several advantages over the type of rod used by most crankbait fishermen in this country.

First of all, I can make a longer cast with the long rod, which means Ill be able to get the lure to run deeper and, potentially, reach more fish. Secondly, it enables me to use heavy line. And, importantly, it gives me the ability to set the hook better after a long-distance cast.

For fishing clear water, I’ve developed a system of fishing crankbaits of combining light line and heavy tackle. I know that sounds strange, but Roland Martin doesn’t do conventional things. A lot of people talk about fishing ultralight tackle and light line. They believe the two have to go together. But why?

In clear water, you’ll often need the light line to attract bass. But you can fish 10-pound line on gear other than light tackle. With enough practice you’ll develop a feel for fishing light line on a flipping stick, for example.

Again, the longer rod allows me to make longer casts than more conventional shorter casting rods. And the other side of the coin was that the flipping stick enabled me to set the hook faster and harder from a considerable distance. If you’re using a 5-foot wimpy casting rod and a 5-pound bass hits your lure from about 70 feet away, its a real chore to set the hook. You’ve got to take into account that the wimpy rod will only give you about 2 pounds of pressure and the line will have some stretch to it. Under those conditions, you cant control a 5- pound bass at all.

With enough practice, you will develop a feel for just how much pressure you can apply with the big rod to the line without breaking off. And DuPonts new Prime gives you a big advantage over monofilament lines on long casts where line stretch hurts your hook-setting ability. Because it has very little stretch, you can set the hook better and quicker with Prime. Its an excellent choice for long-distance fishing.

Another tip that will help your ability to hook bass with crankbaits from considerable distances: I change the hooks on my crankbaits. Ill put big No. 2 treble hooks on the small Fat Raps and Shad Raps. That greatly increases my hooking ability.

I prefer fishing larger crankbaits, although there is plenty to be said for the small diving lures like the Deep Wee-R and the small Rapalas, which catch a lot of small fish. But I seem to lose more fish on the little crankbaits, which can be attributed to using lighter line and the small hooks on the lures. But I hardly miss a bass when I’m using 1/2- and 5/8-ounce Hellbenders or Fat Raps, which have bigger hooks.

Although active bass will often hook themselves on crankbaits, it is very important to sharper regularly.

One reason I have to sharpen the hooks on my crankbaits regularly is the kind of cover I fish with the lures. Unlike many bass enthusiasts in this country, I run crankbaits through some of the nastiest, roughest cover you can find, like tree tops.

First of all, the plastic worm is the most versatile bass bait in the world. I would estimate that I’ve caught at least half of my lifetime bass on the plastic worm in various size, colors, and shapes. And in the major bass-fishing tournaments in the past decade, probably half of the success has been with the plastic worm. Without a doubt, it’s the No. 1 lure, and there are a lot of reasons for this.

The plastic worm is the most weedless and snagless lure available. It can be fished at all depths and all speeds, and can be jigged, cast, trolled, and floated. There are so many variations in plastic-worm fishing that using the worm is complete art and science by itself.

Today’s plastic worms manufactures have developed worm styles for several specific purposes. there are casting worms primarily rigged texas-style. there are spawning worms ranging in length from 8-10 inches( fished with very little weight) The curl-tail are my choice for flipping. A new worm on the market, which is basically a do-nothing style, is the Gary Yamamoto Senko and it has taken the worm market by a storm.

Probably the most successful bass lure currently know to fishermen is the Texas worm rig–a weighted soft plastic worm with the hook point imbedded. In the early years the hardness didn’t make any difference because the hook was exposed. Until about 1964, most worms had hard bodies, and the traditional way to fish them was with weedless hooks. But by the late 1960s,worms of much softer plastic were manufactured. I don’t know who gets credit for it, but some Texas fisherman were taking plain 5/0 and 6/0 Sproat hooks and imbedding the hook into the soft worm so that the point was concealed. There is no weed guard, just the plastic itself: when the hook is set, the point and barb come through the soft plastic and hook the fish. At the time, this was a popular lure in lakes around the Dallas and San Antonio area.

There are some advantages to the Texas worm rig over the old weedless-hook style of worm fishing. The biggest advantage is it’s more compact and streamlined. We’re using cone-shaped bullet worm weights instead of split shot or the old egg sinkers. the cone shaped weights swim their way through grass and other cover much better. Also, the hook is less exposed. The real advantage, though with the Texas rig is the fact that it can be snaked, crawled, and jigged across almost any bottom surface.

For more tips and tactics by Roland Martin visit his web site at fishingwithrolandmartin.com.