It is truly remarkable that a trio of family members can tout this accomplishment, a testament to their passion for the sport. 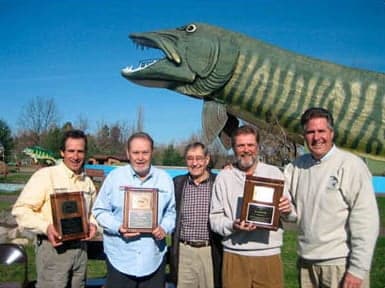 Ron, Al and James Lindner have a unique position in the Freshwater Fishing Hall of Fame. They are three family members who have been inducted into The Hall. Ron and Al were Enshrined and James was recently inducted as a Legendary Communicator. James (left) stands next to his father Ron. Bill Gautche (center) is a Hall of Fame Director. On the right is Emmett Brown the Executive Director of The Hall and to his right, Al Lindner.

This month’s featured Hall of Famer is actually a trio of individuals who have been inducted into “The Hall”  who share the same last name.  Ron Lindner was recently Enshrined joining his brother, Al Lindner in this category.  Enshrinement signifies that a person has made a lasting and significant national or international impact to the benefit of freshwater sportfishing.  There is little doubt that the impact Ron and Al Lindner have had on the sport of fishing has touched everyone that has ever held a rod and reel.

Recognized as one of the best directors and producers in the outdoor industry, James Lindner is the son and nephew—respectively of Ron and Al Lindner. James lives, eats, and sleeps fishing, leaving little time for non-fishing related activities.  James was inducted into the Freshwater Fishing Hall of Fame as a Legendary Communicator this year and accepted his award when his father, Ron Lindner was Enshrined.

Growing up in the world of sports fishing, James Lindner has filmed and fished from the Arctic Circle tundra to South American jungles and from the Atlantic to the Pacific coasts and every state in between. As a multi-species fishermen, James has few equals and his prowess with muskies is legendary.

Over the years, Ron Lindner has become a world reknown sportfishing leader. He continues to fish avidly for all freshwater fish, averaging about 200 days a year on the water each year fishing both freshwater and saltwater and continues to explore the where, when, whys and hows of fish habits and behavior.

During a long career spanning the most revolutionary years in sportfishing history, Al Lindner ranks among the most renowned leaders in the fishing industry. He continues to fish avidly for all freshwater fish, averaging about 180 days a year on the water, and is hailed as one of the world’s best all-around anglers.

As the host of Lindner’s Angling Edge and Fishing Edge television series, Al remains immensely popular as one of the best-recognized angling authorities in North America. Al, however, has always worn many hats, and even his most avid fans may not realize the extent of his past and present involvement with all aspects of the fishing business. Other than finding new and better ways to catch fish, that is.

Being inducted into the Freshwater Fishing Hall of Fame is a tremendous achievement for even one individual.  It is truly remarkable that a trio of family members can tout this accomplishment, a testament to their passion for the sport.
For more information check out the Lindner’s Angling Edge website at anglingedge.com